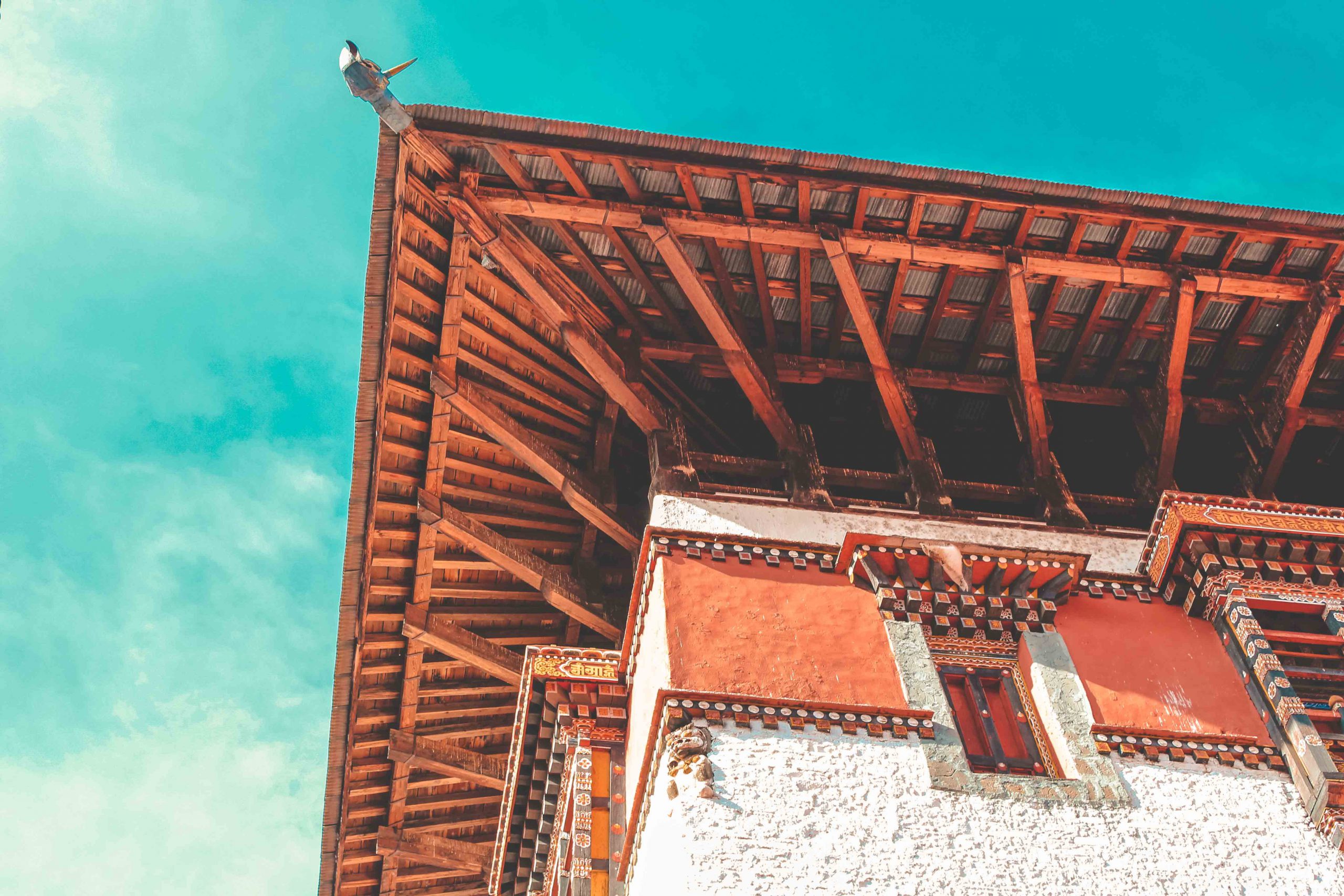 DAY 01. Arrive at Paro (2280 meters):
You will be received by the Representative from Bhutan Hallmark Tours and Treks at the airport and drive to Thimphu. On the way, visit Tamchog Monastery built by Thangthong Gyalpo (Popularly known as Lama Chazampa, which literally means, the Iron Bridge builder) in the 15th century. He (1385 – 1464) was a miracle operational saint from Tibet who came to Bhutan in 1433 looking for Iron Ore. He built 108 bridges across Tibet and Bhutan, out of which 8 were built in Bhutan. His solitary surviving bridge is in Duksum (Tashi Yangtse in Eastern Bhutan).

After lunch, visit Memorial Chorten, a monument dedicated to the Third King of Bhutan. Late His Majesty, King Jigme Dorji Wangchuck. The interior paintings and statues afford a very rare insight into Buddhist Philosophy. Changangkha Monastery, Takin Preserve centre and Sangay Gang view point, the Largest and tallest statue of Buddha in the planet and Tashichho Dzong. Dinner and overnight in Hotel Migmar or similar.

After breakfast, drive to Punakha via Dochula pass. If the weather is clear, we stop for a while at Dochula pass to view Higher Himalayas. While in Punakha, visit Punakha Dzong built in 1637 by Shabdrung Ngawang Namgyal and is situated between Pho Chu (Male River) and Mo Chu (Female River). For many years until the time of the second king, it served as the seat of the Government. The construction of the Dzong was foretold by Guru Rimpoche, who predicted, “…a person named Namgyal will arrive at a hill that looks like an elephant”. There was a smaller building here called Dzong Chu (Small Dzong) that housed a statue of Buddha. It is said that Shabdrung ordered the architect, Zowe Palep, to sleep in front of the statue, while Palep was sleeping; the Shabdrung took him in his dreams to Zangtopelri and showed him the palace of Guru Rimpoche. From his vision, the architect conceived the design for the innovative Dzong, which in keeping with the custom, was not at all committed to paper. The Dzong was named Druk Pungthang Dechen Phodrang (Palace of Great Happiness). The war materials captured during the battle with Tibetans are conserved here. Punakha is still the winter residence of Je-Khenpo and The third King, Jigme Dorji Wangchuk convened the First National Assembly here in 1952.

After breakfast, drive to Wangdiphodrang. Enroute stop a while to view Chimi Lhakhang also called the “Temple of Fertility” built by Lama Drukpa Kuenley also popularly known as “Devine Mad man” in 15th century. He (1455 – 1529) was one of the Bhutan’s Favourite Saints who was born in Tibet, skilled at Ralung Monastery and was a contemporary and a disciple of Pema Lingpa. He Travelled throughout Bhutan and Tibet as a “Neljorpa” (Yogi) using songs, humour and outrageous behavior to dramatise his teachings of Salvation through sex.

While traveling sightseeing in the valley of Wangdiphodrang, it comprises: visit to Wangdiphodrang Dzong (from outside) built in 1638. Legend associates that as the people were searching for the site of the Dzong; four ravens were seen flying away in four directions. This was well thought-out auspicious sign, representing the spread of religion to the four points of the compass. The Dzong is situated at the confluence of Mo Chu and Tang Chu rivers.

After lunch, drive to Thimphu. Free for shopping in the evening. Dinner and overnight in Hotel Migmar or similar.

After breakfast, visit the National Library, which holds an enormous compilation of ancient Buddhist manuscripts followed by visit to Painting School, famous for carving and free hand art and Folk Heritage Museum.

After lunch, visit to Handicrafts Emporium to see the exquisite artistry of traditional crafts and textiles. In the evening, drive to Paro. Dinner and overnight in Tashi Namgay Resort or similar.

After early breakfast, Excursion to Taktsang Monastery: A short drive takes us to Satsam Chorten, the trail climbs through beautiful pine forest, many of the trees festooned with Spanish moss, and an occasional grove of fluttering prayer flags. We stop for a rest and light refreshments at the Taktsang Jakhang (cafeteria) and then walk a short distance until we see, clearly and seemingly within reach, Taktsang monastery. The primary Lhakhang was built around Guru Rimpoche’s meditation cave in 1684 by the Penlop of Paro, Gyaltse Tenzin Rabgay; this incredible monastery clings to the edge of a sheer rock cliff that plunges 900 meters into the valley below. Legend has it that Guru Padmasambhava, the tantric mystic who brought Buddhism to Bhutan in 747 AD, flew here on the back of a flying tiger, Dorji Drolo, said to be his favourite consort.

After lunch, visit the Ta dzong, an ancient watchtower, which has been, since 1967, the national museum of Bhutan then visit Rimpung Dzong (Paro Dzong) built in 1646 by Shabdrung Ngawang Namgyal. The Dzong presently houses administrative offices.

In the evening, visit the Drukgyel Dzong, now in ruins was built by Shabdrung Ngawang Namgyal to commemorate the victory over the Tibetan invaders in1644; the dzong name’s means indeed “ victorious Druk “. The Dzong was used as an administrative center until 1951 when a fire caused by butter lamp destroyed it. Then visit Kyichu Lhakhang, one of Bhutan’s oldest and most sacred monasteries dating from the introduction of Buddhism in the 8th century.

Srongsen Gampo: He was a Tibetan king who married a Chinese princess, Wenchen in 641, as a part of her dowry was a statue called “Jowo” which was an Indian image of Buddha, Sakyamuni as a small boy. In 659, He decided to build 108 Temples in a single day to pin the Ogress to the earth forever and, at the same time, convert the Tibetan people to Buddhism. 6 of these Temples lie in Bhutan, most prominent of them are Jambay Lhakhang in Bumthang and Kichu Lhakhang in Paro. Kichu Lhakhang is said to hold the left foot of the Ogress and Jambay Lhakhang pins the left knee. Dinner and overnight in Tashi Namgay Resort or similar.

Early morning, drive to the Airport and Farewell.

The combination of the archaeology, the food and wine experiences, the swimming and the generally relaxed atmosphere made for a very enjoyable tour. There was a high attention to detail. Our main tour guide was very enthusiastic and highly qualified. Excellent.

Bhutan, a Buddhist kingdom on the Himalayas’ eastern edge, is known for its monasteries, fortresses (or dzongs) and dramatic landscapes that range from subtropical plains to steep mountains and valleys.