The Land of Happiness Tour 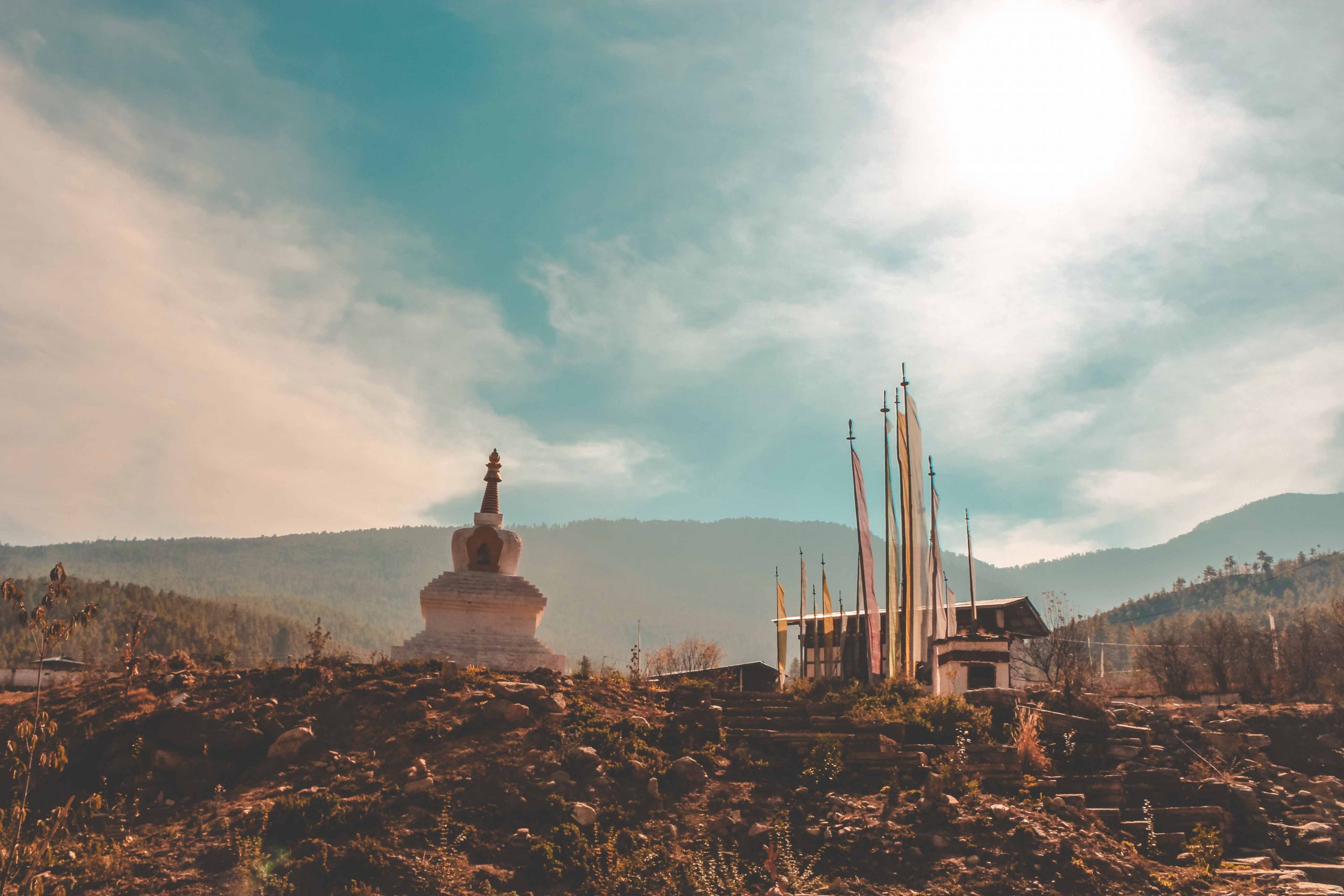 Day 1: Arrival Paro,Paro to Thimphu
Arrive paro by Druk Air or Bhutan Airlines, the only national carrier. The flight offers you view of mountains and landscapes. Upon arriving the Paro Valley and after completing visa formalities, you will be met by Gawaling Tours & Treks’ representative at the airport.
Visit the fascinating Rinpung Dzong meaning ‘fortress of the heap of jewels’, which is the seat of the Paro district built in 1645 by Shadrung Ngawang Namgyal.
Drive to Thimphu, the small and charming capital city of Bhutan. The journey would take us one hour.Distance: 54 km & estimated driving time: 1 hour

On the way, visit Tachog Lhakhang (temple) , this 14th century temple located on the base of a mountain across the Pa chu on the Paro-Thimphu highway, is a must visit temple in the Paro valley. Built by the great master architect Thangtong Gyalpo, the temple houses some unique statues. To get to the temple one may actually walk over the iron chains that spans over the Paro chu(River).

After crossing Chunzom which is confluence of Paro and Thimphu rivers, the drive will take you along the Wangchu ( Thimphu river) to Thimphu valley.

After checking into Hotel Visit:
Kuenselphodrang: Where you can witness a gigantic 169 feet tall statue of Buddha Dordema overlooking the southern approach to Thimphu, the capital of Bhutan.

Thimphu TrashiChho Dzong: is a Buddhist monastery and fortress on the northern edge of the city of Thimphu in Bhutan, on the western bank of the Wang Chu. It has traditionally been the seat of the Druk Desi (or “Dharma Raja”), the head of Bhutan’s civil government, an office which has been combined with the kingship since the creation of the monarchy in 1907, and summer capital of the country. Presently the seat of present king of Bhutan.
Overnight stay in a hotel.

Day 2: Thimphu to Punakha: Distance: 71 km & estimated driving time: 2 hours
Drive over the DochuLa pass(3140m) in the morning. On clear weather, we can see around 200 miles of Himalayan summits bordering northern Bhutan.
You will also visit Druk Wangyal Lhakhang (monastery) which was built by Ashi Dorji Wangmo Wangchuck ( the Queen Mother of Bhutan) as a tribute to His Majesty the fourth King of Bhutan, Jigme Singye Wangchuck and armed forces after His Majesty led a successful operation against Indian militants who had occupied certain areas of Bhutan. The gallery of the Druk Wangyal Lhakhang has beautiful murals depicting some of the important events in the reigns of the Kings of Bhutan. This is a unique feature of this monastery that no other monastery in Bhutan has.
As we descend from the pass, we will notice that the vegetation changes from sub-alpine to sub-tropical. At the lower elevation, we can see banana plants, cactus and other semi-tropical plants, and the green terraced rice fields of Punakha.

On the way, stop for lunch at Metsina village and then hike to the Devine Madman’s Monastery-Chhimi Lhakhang, famously known for its fertility shrine, where one can receive a special fertility blessing. Divine Madman” known for his outrageous behavior.

We begin our explorations of Punakha valley with a visit to Punakha Dzong, located between two rivers. It serves as the winter residence for the central monastic body. Punakha has been inextricably linked to some of the most momentous events in the Bhutanese history and deserves its reputation as one of the most beautiful and significant regions at the heart of Bhutanese culture. Punakha had served as the capital of Bhutan from 1637 till 1907 and the 1st National Assembly was held there. The dzong is historically important and stands as the symbol for a unified Bhutan.
Overnight stay at hotel.

Day 3: Punakha to Paro
After breakfast Drive towards Paro via Thimphu. Visit:
Traditional handmade Paper Factory:It is located approximately 1 km from Thimphu City. The factory uses the bark of two tree species, the Daphne tree and Dhekap tree in the manufacture of traditional paper. Visitors can observe the entire process of producing handmade paper using ancient traditional methods that have been practiced for generations. You can even try your hand at this ancient craft and make some paper of your very own as a souvenir. Deh-sho paper was originally used by monasteries for woodblock and manuscript books and also for writing prayer books.
The Jungshi paper factory continues to preserve and promote this age-old Bhutanese tradition. It also produces various other products, such as stationery and greeting cards.
Memorial Chorten: The National Memorial Chorten was consecrated on July 28, 1974 in memory of the Third King. It is a monument to the Third Druk Gyalpo and to World Peace. Visitors will find elderly Bhutanese people circumambulating the Chorten throughout the day. Chorten literally means ‘Seat of Faith’ and Buddhists often call such monuments, the ‘Mind of Buddha’. The chorten is an extraordinary example of Buddhist architecture and artwork with its gorgeous paintings and intricate sculptures.
The chorten is a large white structure crowned with a golden spire. It is located close to the center of Thimphu city and is one of its most iconic monuments.
Kyichu Lhakhang: It is one of the two oldest monasteries built in Bhutan by the King of Tibet, Songtsen Gampo in the 7th century and most sacred monastery of Bhutan and in 1968, H.M Ashi Kesang, the Queen mother of Bhutan, Built the second temple in Original pattern.
Towards evening Visit Farm House and enjoy the traditional cuisine with the local family.
Further you can to experience the medicinal Hot stone Bath.
Overnight stay at Hotel.

Day 4: Hike to Tiger’s Nest
Paro is a valley of religion and myth. The most famous landmark, the Taktsang Monastery (Tiger’s Nest), stands on a granite cliff about 800m above the valley. Legend has it that Guru Rinpoche, a famous Buddhist saint, flew to Paro on a tigress and meditated at Taktsang. The monastery is considered as a national treasure of Bhutan.
The hike to Taktsang would take us around two and half hours. To reach a cafeteria, a point from where one can enjoy a great view of the monastery is more than an hour walk from the road-head uphill. Those interested can walk further 45 minutes uphill to get a closer view of the monastery and return to the cafeteria for lunch. The journey downward to the road-head would take us less than one and half hours.
Overnight Stay in Hotel

Day 5: Departure
After breakfast in the hotel, drive to the airport for departure.

The combination of the archaeology, the food and wine experiences, the swimming and the generally relaxed atmosphere made for a very enjoyable tour. There was a high attention to detail. Our main tour guide was very enthusiastic and highly qualified. Excellent.

Bhutan, a Buddhist kingdom on the Himalayas’ eastern edge, is known for its monasteries, fortresses (or dzongs) and dramatic landscapes that range from subtropical plains to steep mountains and valleys.